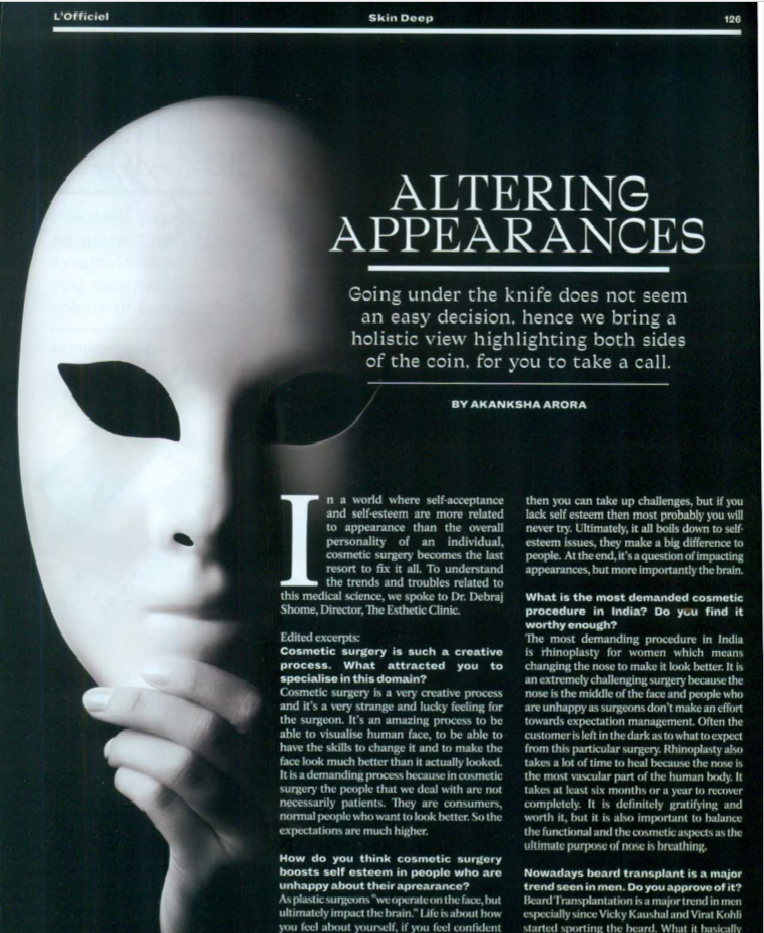 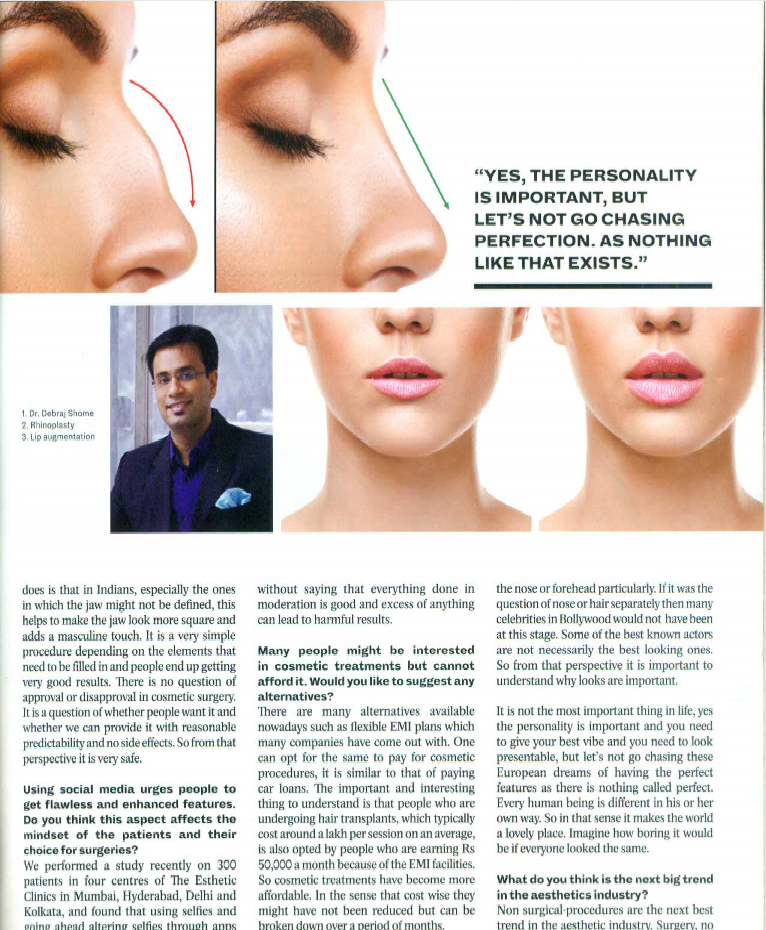 In a world where self-acceptance and self-esteem are more related to appearance than the overall personality of an individual, cosmetic surgery, becomes the last resort to fix it all. To understand the trends and troubles related to this medical science, we spoke to Dr Debraj Shome, Director, The Esthetic Clinic.

Edited excerpts:
Cosmetic surgery is such a creative process. What attracted you to specialise in this domain?
Cosmetic surgery is a very creative process and it’s a very strange and lucky feeling for the surgeon. It’s an amazing process to be able to visualize human face, to be able to have the skills to change it and to make the face look much better than it actually looked. It is a demanding process because in cosmetic surgery the people that we deal with are not necessarily patients. They are consumers, normal people who want to look better. So the expectations are much higher.

How do you think cosmetic surgery boosts self esteem in people who are unhappy about their appearance?
As plastic surgeons, “we operate on the face, but ultimately impact the brain. “ Life is about how you feel about yourself, if you feel confident than you can take up challenges, but if you lack self esteem then most probably you will never try. Ultimately, it all bolts down to self-esteem issues, they make a big difference to people. At the end, it’s a question of impacting appearances, but more importantly the brain.

What is the most demanded cosmetic procedure in India? Do you find it worthy enough?
The most demanding procedure in India is rhinoplasty for women which means changing the nose to make it look better. It is an extremely challenging surgery because the nose is the middle of the face and people who are unhappy as surgeons don’t make an effort towards expectation management. Often the customer is left in the dark as to what to expect from this particular surgery. Rhinoplasty also takes a lot of time to heal because the nose is the most vascular part of the human body. It takes at least six months or a year to recover completely. It is definitely gratifying and worth it, but it is also important to balance the functional and the cosmetic aspects as the ultimate purpose of nose is breathing.

Nowadays beard transplant is a major trend seen in men. Do you approve of it?
Beard Transplantation is a major trend in men especially since Vicky Kaushal and Virat Kohli started sporting the beard. What is basically does is that in Indians, especially the ones in which the jaw might not be defined, this helps to make the jaw look more square and adds a masculine touch. It is a very simple procedure depending on the elements that need to be filled in and people want it and whether we can provide it with responsible predictability and no side effects. So from that perspective it is very safe.

Using social media urges people to get flawless and enhanced features. Do you think this aspect affects the mindset of the patient and their choice for surgeries?
We performed a study recently on 300patient in four centres of The Esthetic Clinics in Mumbai, Hyderabad, Delhi and Kolkata, and found that using selfies and going ahead altering selfies through apps did get into people’s mind-sets. They were looking for more cosmetic treatment and procedure that could help them achieve the desired look. So yes, like every other trend, it is important to keep an eye especially on younger children or adolescents and young adults, as they tend to develop Dysmorphia, under which people feel a constant need to change the structure of their face. It goes without saying that everything done in moderation is good and excess of anything can lead to harmful results.

Many people might be interested in cosmetic treatments but cannot afford it. Would you like to suggest any alternatives?
‘There are many alternatives available nowadays such as flexible EMI plans which many companies have come out with. One can opt for the same to pay for cosmetic procedures, it is similar to that of paying car loans. The important and interesting thing to understand is that people who are undergoing hair transplants, which typically cost around a lakh per session on an average, is also opted by people who are earning Rs. 50,000 a month because of the EMI facilities. So cosmetic treatments have become more affordable. In the sense that cos wise they might have not been reduced but can be broken down over a period of months.

Can you describe your philosophy on beauty; plastic and natural both?
My philosophy on beauty is, do what makes you happy. I don’t think you should allow excess pressure to change your mind on the way you look and you should be happy with yourself. In my opinion, everyone looks at a person, as a sum of parts. No one looks at the nose or forehead particularly. If it was the question of nose or hair separately then many celebrities in Bollywood would not have been at this stage. Some of the best known actors are not necessarily the best looking ones. So from that perspective it is important to understand why looks are important.

It is not the most important thing in life, yes the personality is important and you need to give your best vibe any you need to look presentable, but let’s not go chasing these European dreams of having the perfect features as there is nothing called perfect. Every human being is different in his or her own way. So in that sense it makes the world a lovely place. Imagine how boring it would be if everyone looked the same.

What do you think is the next big trend in the aesthetics industry?
Non surgical procedure are the next best trend in the aesthetic industry. Surgery, no matter how skilled the surgeon is, well always be associated with side effects, healing issues and recovery time. So that’s why people want their treatments to be predictable and without any side effects. This trend is catching on so that people can go ahead and get great results without necessarily suffering through risk and downtime related to surgery.