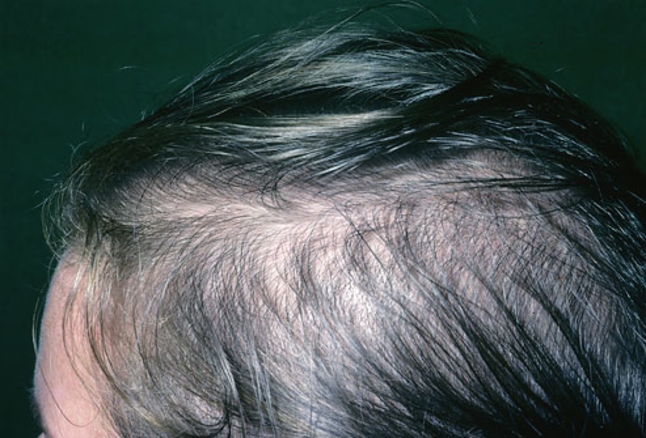 Polycystic ovary syndrome (PCOS) is a common hormone disorder that can cause a range of symptoms, including hirsutism, which is excess facial and body hair.

While many with PCOS grow thicker hair on their face and body, some experience hair thinning and hair loss, which is referred to as female pattern hair loss

The female body produces male hormones, also called androgens. This includes testosterone. Androgens play a role in triggering puberty and stimulating hair growth in the underarms and pubic areas. They have other important functions as well.

PCOS causes extra androgen production, resulting in virilization. This refers to the development of more masculine features, including excess hair in places where it doesn’t usually grow.

Therefore, hormonal tests are very important in women, so that PCOS can be diagnosed & appropriately treated.

Effects of QR 678 in female pattern alopecia in comparison to topical minoxidil:

Existing medical therapy used in female pattern alopecia include the use of topical minoxidil and oral finasteride tablets.

In August 1988, the US FDA finally approved minoxidil for treating baldness in men under the trade name “Rogaine”. The agency concluded that although “the product will not work for everyone”, 39% of the men studied had “moderate to dense hair growth on the crown of the head”. This medicine was then recommended for female pattern hair loss, as well.

Effects of QR 678 in female pattern alopecia in comparison to oral finasteride:

This medicine was then recommended for female pattern hair loss, as well.

We believe that finasteride works well to stop or reduce hair fall in a majority of people, but does not work as well at hair regrowth. Regular usage of finasteride leads to compliance issues & most people do not use finasteride continuously, because of the side effects it has on sexuality.

Synergistic use of QR 678® & minoxidil & finasteride  in female pattern alopecia: